Trust South Africans to believe that they are not Africans, not to forget that their country is one of the only two in the world to bear the name Africa. However, they have bicycle lanes! Whole wide lanes that have been set aside for cyclists. Thus, cycling in South Africa is very safe!

Advanced and with better standards of living for her people than any other nation in Africa, it is little wonder that South Africa is a trendsetter for the rest of the continent. And right now, it is setting trends for bicycle commuting. Still far from countries like Sweden and the Netherlands where people do cycle to work seriously, but this, coming from Africa is indeed very encouraging. 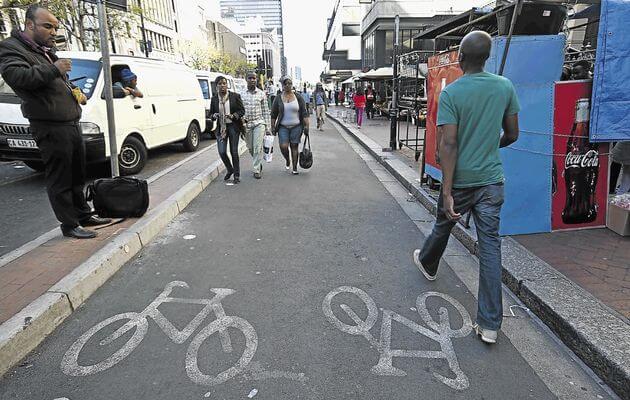 This bicycle lane in south Africa shows the willingness of the authorities to encourage people to cycle to work
Image source: www.timeslive.co.za

And it is not for touring, not a cycling tour, it is for work. They are going to work. Is it safe, knowing the habits of the South African drivers, which we have written about here in the past? Well, cycling to work in South Africa’s …. is fairly safe.

Referred to as bicycle commuting, it is fun, totally enjoyable and it … would you believe it… is free! Someone said that the best things in life are free, and so is cycling. Did you know that pushing the pedals can burn a considerable number of calories every day? Think about it again, cycling to work is free, it is enjoyable, it is healthy, it is fast, you know, no traffic holdups and so on. And the benefits go on and on.

Bicycle commuting can help you save time as you aren’t held up in snarl ups like this one
Image source: www.driverabroad.com

You just need to buy a bike, and the safety equipment, and a water bottle, and you will be ready to hop on your bike and ride to work. Apart from the occasional repairs, you will find bicycle commuting very cheap. It is just the kind of experience that a money-strung continent needs.

Did we mention the good that cycling to work does for the environment. Bicycles don’t use fuel, thus there are no emissions at all. For a continent that contributes just 1% to global warming, we should actually be commended, but the commendations will not be forthcoming. This is the truth. As the largest vehicle market in Africa, this country is also poised to become the biggest bicycle commuter in the continent.

In a continent where owning a car is considered a status symbol, the fact that South Africa is taking up commuter cycling could mean that we are coming of age. A car is no longer about the “haves and the have nots”; it is about functionality, that is, how fast can my car take me from point A to B? Is my bike faster? And so on….

Ready to hit the road, a South African with his bicycle
Image source: www.dailymaverick.co.za

That for many years South Africa has been holding prestigious cycling races seems to help matters a lot. Cycling to work is now more commonplace than ever, with even some companies encouraging their employees to cycle to work.