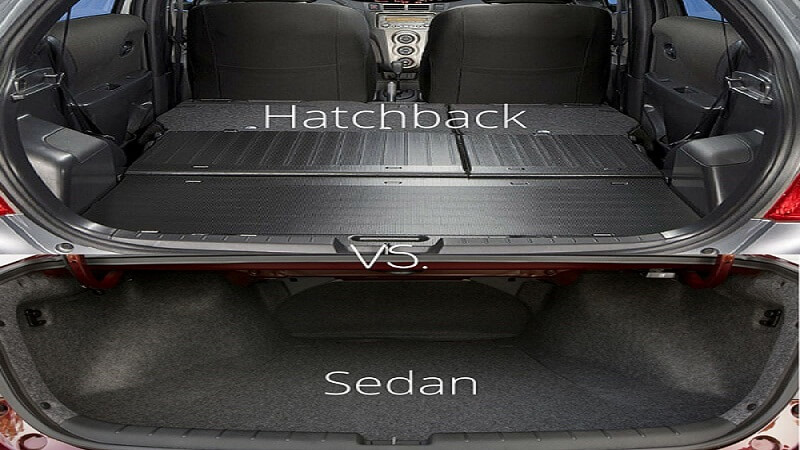 A hatchback vs a sedan.
Image source:www.fasttrackautosales.com

A sedan or saloon is a passenger car in a three-box configuration with A, B & C-pillars and principal volumes articulated in separate compartments for engine, passenger and cargo. The passenger compartment features two rows of seats and adequate passenger space in the rear compartment for adult passengers. The cargo compartment is typically in the rear, with the exception of some rear-engined models, such as the Renault Dauphine, Tatra T613, Volkswagen Type 3 and Chevrolet Corvair. It is one of the most common car body styles.

A hatchback is a car body configuration with a rear door that swings upward to provide access to a cargo area. Hatchbacks may feature fold-down second row seating, where the interior can be flexibly reconfigured to prioritize passenger vs. cargo volume. Hatchbacks may feature two or three-box design.
There are a lot of pros and cons to owning a hatchback trunk instead of a sedan, but the pros seem to outweigh the cons when it comes to hatchbacks, and here’s why.

Several top car models for resale value with hatchbacks are predicted to retain more than 58 percent of its value after three years. That’s pretty impressive when you realize that the typical car only retains about 35 percent.

The Mazda 3’s five-star safety rating helps to give everyone in the car an additional sense of security. The sedan is also offered with several advanced safety features. The blind-spot monitoring system definitely comes in handy for the drivers who routinely travel on the highway. On the other hand, the adaptive headlight system effectively improves visibility when driving on the rural roads at night. 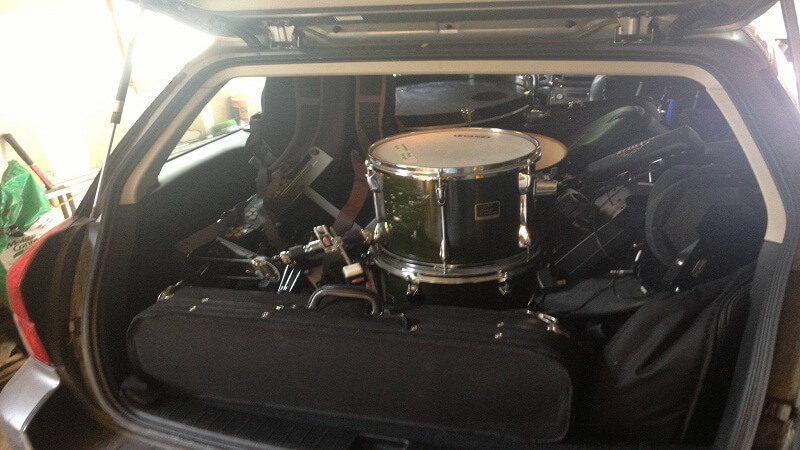 The hatchback makes more practical sense than a sedan. The Mazda3 is the perfect example of this. With the seats down, the Mazda3 hatchback offers nearly 43 cu ft of cargo space. With its seats up it still offers an insane 17 cu ft of space, whereas the Mazda3 sedan only has 11.8 cu ft of space in the trunk. A hatchback allows more cargo space for groceries or for laying in the back of your car enjoying the sunset.

Hatchbacks offer a more sleek and distinctive look than many sedans. That’s a big deal to a lot of drivers who want to stand out from the crowd instead of join in on the “3­box” appearance.

Equipped with a 155-horsepower engine, even the base version of the Mazda 3 maintains a fleet-footed nature. However, true thrill seekers should step up to the optional Skyactiv engine. The larger 2.5-liter, four-cylinder engine is able to push out an impressive 184 horsepower and 185 pound-feet of torque. When needed, the 3s model can race to 60 mph in about 7.2 seconds. 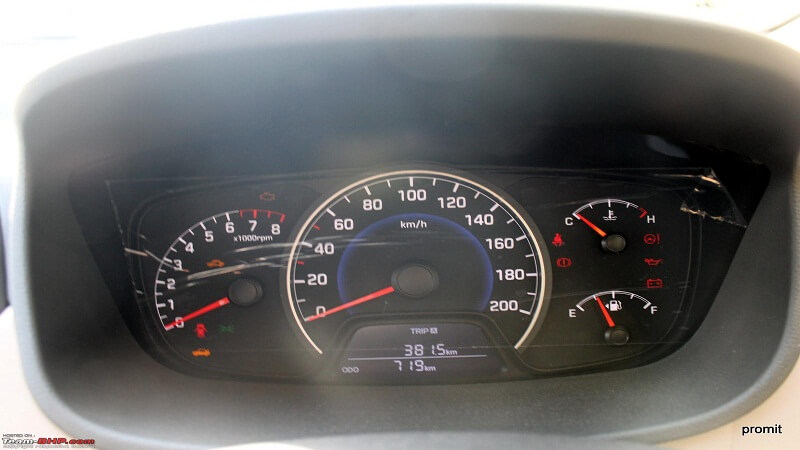 As long as the owner keeps up with the basic maintenance, the Mazda 3 should deliver years of trouble-free service. Over the years, the Mazda 3 has developed a reputation for its dependability. The car’s solid build quality and well-designed parts help to keep it out of the repair shop.
The cons include:

1 ) Lack of an All-Wheel Drive System

All versions of the hatchbacks come standard with a front-wheel drive setup. Drivers who need an extra degree of traction in the winter may prefer an all-wheel drive sedan such as the Subaru Impreza.

2) Volume of the Engine Sound

Although most people will not find the engine sound to be annoying, there are some car owners who may prefer a quieter ride. For example, during acceleration, the Mazda 3’s engine can be heard from the driver’s seat.