Africa is not only about the outdoors and the wild. There is more to this continent than safaris and tours. Technology, especially in the automotive world, has been in an uphill progress and among the successful projects Africa can boast of is the Moroccan Laraki Fulgura. This is the name given to the first African sportscar, designed and manufactured by the Laraki group of Morocco. The company’s first attempt at the world of sports cars saw the Laraki Fulgura concept unveiled in 2002 at the Geneva Motor Show. The production version was showcased at the 2003 edition of the same show. 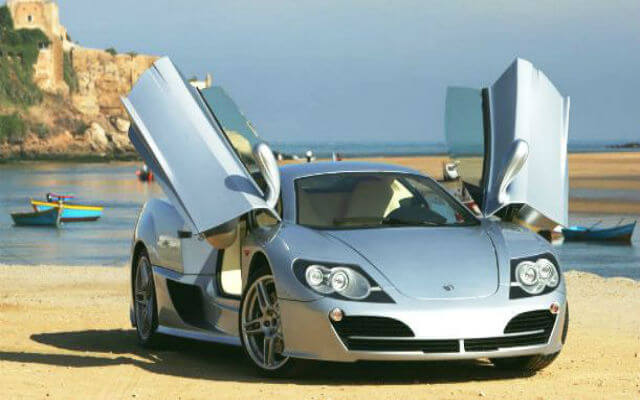 2004 silver Laraki on the beach

The original version was slightly altered in design and unveiled in 2005. The manufacturer was aiming at providing a super sports car that combines class, performance and luxury. For this reason, the Fulgura’s design was based on the mechanical concepts and frames of a Lamborghini Diablo. That the vehicle was created in Africa was in itself a huge wonder, given the economic status of this continent. This however, does not mean that the Laraki Fulgura disappointed. The manufacturers left nothing to chance making sure that all aspects, from the basics to the complex parts of the vehicle were in their proper place.

Body
The Laraki Fugura has an aerodynamic body that fits only on high performance super cars category. Though the front looks timid and common as it copies the Diablo, the back is more aggressive which works well with the sportscar theme. The Fulgura is 1350 kgs heavy with a length of 4400 mm, a width of 2025 mm, and a height of 1130 mm. The body and chassis are constructed from carbon fiber and aluminum to reduce the weight while keeping the toughness factor tightly in the design. The fixed-head coupe is a two door, two seat machine without luggage space.

Performance
As mentioned, the Laraki Fulgura was manufactured to cater for the needs of an African sports car and thus the performance is nothing short of sporty. This African machine has a top speed of 350 km/h with an ability to move from dead zero to 100km/h in less than 4.5 seconds. With a displacement of 6000 cc, the Laraki Fulgura can be classified in the world of guzzlers.

Engine
Although the Laraki Fulgura was created in Africa, a lot of factors had to be borrowed and one of them is the machine that drives the car. The Fulgura is fitted with a Mercedes V8 engine with a displacement of 6000 cc. The vehicle is rear wheel drive powered by a 6-speed manual transmission gearbox. Just like the cars its design was borrowed from, the Laraki Fulgura has a mid engine, with a longitudinal alignment, which is supercharged to give it the extra boost.

Power Output
With the type of displacement and engine the Fulgura has, it has the ability to produce 680 hp, which is standard among its kind.

Changes
Since 2002 when the concept was unveiled, there have been some major and minor changes in the design and other 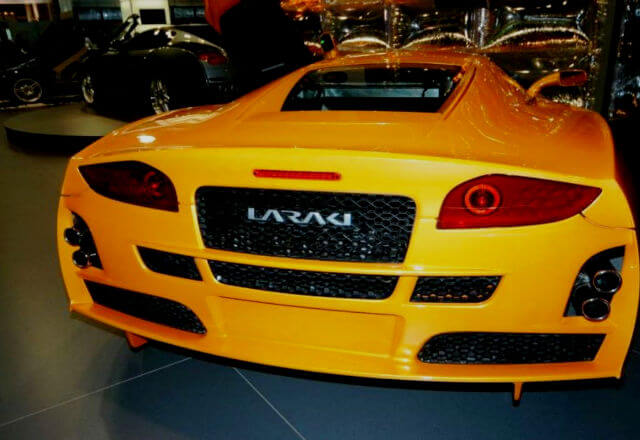 The aggressive rear of the Laraki Fulgari

details, all in efforts to improve the Fulgura to what it is today. The Laraki Fulgura remains one of the best African sportscar to ride the roads of this great continent.

One comment on “Laraki Fulgura: The Rise of African Super Cars”