Nissan has remained highly competitive in the automobile world mostly because of their efforts in producing vehicles that cater for all the different markets. Nissan March is their idea of giving consumers a small compatible car aimed at the urban setting. Also known as Nissan Micra in Japan, the March is one of those small cars in appearance but has huge benefits. The car is intended for a small family or solo drivers and its size is geared towards small parking spaces.

Here are a few benefits that you get when you own a Nissan March:

The March is not all that new since it was introduced in the 80s and has since taken many forms to get to where it is today. The vehicle has seen changes from a 3 to 5 door hatchback, a panel van a 2 door cabriolet, 4 door sedan, 5 door station wagon all in efforts of catering for the consumer’s needs. Today, the March has been reduced to a compatible 5 door hatchback. The hatchback looks soft from the outside and fits well in the urban environment.

The vehicle features a small but strong engine. With a displacement of 1198cc you can expect nothing short of amazing. The consumption is around 6.5 liters for 100 kilometers which is by all standards economical. In this era of inflation, where fuel prices are making giant leaps to the top, you need to drive a vehicle that takes care of your pocket. It is less costly in maintenance and when it is combined with its efficiency in fuel consumption, it becomes the perfect hatchback.

Nissan March has been fitted with safe drive features such as airbags. Then there is the anti-lock braking system which is aimed at the reduction of factors that cause accidents in a car. The vehicle is manufactured to ensure the driver and passengers’ safety with strong seat-belts and comfortable seats.

With horsepower of between 52 hp to 100 hp depending on the model, the March provides enough power to handle most of the urban challenges. The vehicle has received a performance optimization which enhances balance between body weight and displacement. Nissan has ensured that the March is fitted with a strong and reliable suspension system which offers a smooth drive.

Although the March is small hatchback, the interior is not as small as most people would think. The front seats are comfortable with ample space for the driver and the passenger. The rear seats have been designed to fit three adults comfortably with enough leg space for long drives. The dashboard is large and features large compartments for storage. 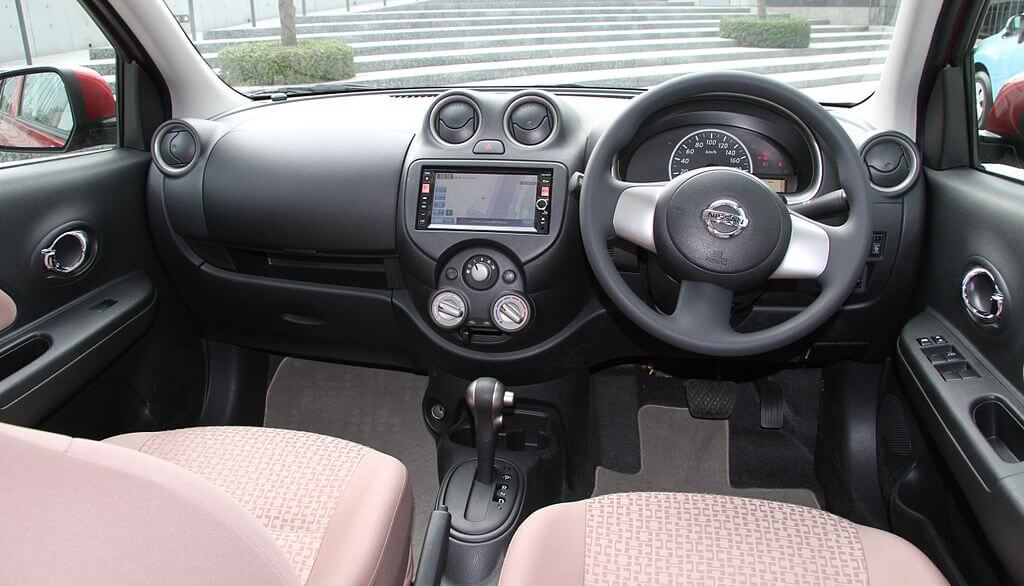 This is the interior of the 2012 Nissan March
Image source: commons.wikimedia.org

Nissan March might seam like a tiny vehicle to most people, but as a measure to compete in the flooded market, Nissan has managed to produce a hatchback with a difference in performance, fuel economy, interior space and handling.