Two V8 engines, combined, form a massive 16 cylinder engine. Great is the skill that has been employed to build a car that is a monster on the race track and at the same time, a car that can be driven (or should we say idled?) gently in the estate. With a top speed of slightly more than 431km/h, the Bugatti Veyron holds the Guinness World Record for the fastest, street legal production car in the world. But what makes the car such a performer? That it is the work of genius in both engine and body is no doubt, but seriously, they just don’t make them like that, otherwise we would all be driving super performance cars. Sadly, Bugatti Veyron will only remain a joy for the chosen few in the world. As for the rest of us, we can only marvel, and read about its speed.

It is all in the engine

But of course, who doesn’t know this? You must have come across many automobiles that are turbo charged, and that is where it all starts. When a car is turbocharged, it means that it lets more air into the cylinders, by compressing the air in the cylinders such that they can hold more air without requiring to be enlarged. But turbocharging is only a small part of what really makes the Bugatti Veyron very powerful.

The Veyron engine is man-made, with almost every part built separately and then fitted together. Nothing about this car is normal, because the engine alone has an output of 1001 horsepower, you can imagine the combination of 1001 horses! The Veyron has brakes that have been made by the same company that makes jumbo jet brakes, no less. Because this car travels faster at full speed than a jet taking off, it has its own light speed sensors to control the wings that in turn keep it on the ground, otherwise, the Veyron would just fly. It has been built by the combined genius and skill of aerospace and automotive engineers.

The engine is made of titanium, the same material that is used in planes, where the normal compact cars use steel. Every bolt in this engine is tightened manually, by hand, and it is then checked by computers for errors. 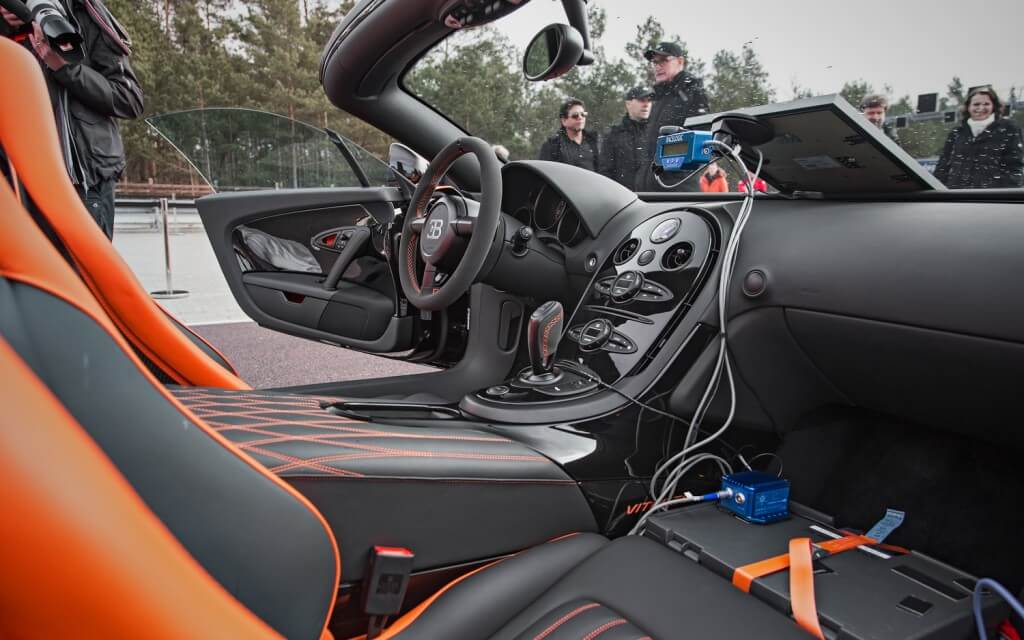 The front interior of the Bugatti Veyron
Image source: sahacars.com

The exhaust system is made of titanium, using a tested technology that is employed in aeronautical engineering. This is the only metal that is capable of withstanding the heat from the engine, considering that the Veyron can throw flame up to six feet when ignited.

The car accelerates fast, blasting its way to more than 298 km/h in less than 17 seconds, which is way faster than the take off speed of a jumbo jet (which is an average of 281km/h. The transmission speed is as fast, if not faster than the blinking of your eye. Actually, you just feel the increased speed but you do not feel the transition. Accelerating without break of power is a feat that the Bugatti engineers have mustered so well.

The double clutch transmission makes transmission very smooth and because it is controlled by computer, the transmission is very steady, as would be required of any engine with 1001hp.

The Veyron acceleration is 100km in 2.5 seconds! If that is not incredible, then that word has lost its meaning. But one thing, this car requires top performing brakes. It uses huge disc brakes that are made of ceramic, titanium and hi-tech carbon. Every disc is hand made in Germany, with the raw materials hand molded. Well, we could go on and on, but there would be no end to a discussion of the engineering genius behind the Bugatti Veyron.