From when the first car tottered on the roads of this great continent more than a hundred years or so ago, carrying bwana and his memsahib… you see, the first cars must have come with the colonialists… to today when our urban centers are catching up with the impressive highways of the west, we wonder whether there are car museums in Africa. Of course there are, in South Africa.

This Mercedes-Benz 540K is older than you, by far. It is on display at the Franschhoek Motor Museum
Image source: www.fmm.co.za

The museums might be recently established, but the collections housed there are as old as time. For example, you will find even horse, oxen drawn vehicles! If you would love to see the transport history of South Africa, which by the way is a reflection of how transport has grown over all of Africa, these museums will give you a very good view of how things used to be.

There are steam driven vehicles dating to as far back as 1900… yes, modern transport is that old even in Africa. However, what will knock you off your feet will be the bicycles and motorbikes of … say, from 1786. See also a wonderful collection of fire engines and equipments and so many more. If you love mechanical history, you will have more than enough eye candy to last you many years.

This one houses bicycles, motorcycles, animal drawn carriages, fire equipment and engines, buses, trucks, trams, trolley buses and so many more. It is the largest of all car museums in South Africa. It was established in 1964 and over time, it has grown to have an impressive collection of artifacts and memorabilia.

You will see rare steam vehicles that are more than 100 years old, horse trams as well as rickshaws which are no longer in use. In fact a visit to this museum will be a privilege and a glimpse into the future. It is only when you see the vehicles of then that you will be able to understand just how far innovation has come. 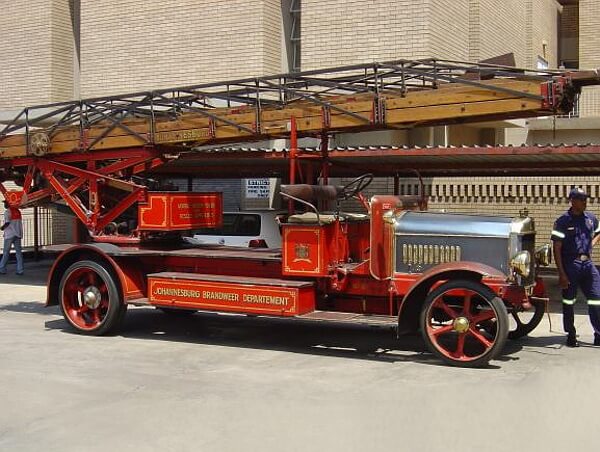 What an awesome looking fire engine, and in prime condition too at The James Hall Museum of Transport
Image source: www.jhmt.org.za

This is where you will get a real but rare glimpse of the first American muscle cars, the Charger and Chevy Camaro of the 1960s just as you see them in the movies. There are more than 220 vehicles in their collection and many more artifacts. To give visitors an organized learning experience at the museum, they have divided their cars according to the times. For example, Post 60 is for vehicles built after January 1961, Post 45 is for vehicles built between January 1946 and 1960 December. Then there is the Post-Vintage for vehicles that were built between 1st Jan 1931 and 31st Dec 1945. VINTAGE era is for vehicles that were produced between 1st January 1919 and 31st December 1930. Veteran is for cars built in period between January 1905 and Dec 1918 and Antique is for cars built before 1904 December.

An ancient tram at The James Hall Museum of Transport
Image source: www.jhmt.org.za

There are many cars, housed in all of 4 buildings. Motoring enthusiasts cannot get enough of the Franschhoek Motor Museum. There is a small admission fee to be paid.

There are other museums in South Africa including Wijnland Museum.