There are several parts of a car that you may have not have heard about. These are the ones only known by your local mechanic, and which he rarely shares information about with you. For instance, how much do you know about the ‘alleged’ presence of any bushes in your car? Let us focus on suspension bushes for instance.

Role: Why a Car Needs These

A car has many moving parts that need to be joined to the chassis to form one functioning body. Wherever these joints are to be made, suspension bushes are used, acting more like human joints. Essentially, these bushes function to damp the energy when it is transmitted through them. These joints are made up of materials such as rubber, polyurethane and so forth, thus allowing for seamless movements when, for instance, going up a bump on the road. Suspension bushes are thus crucial in minimizing noise and unnecessary vibrations from the chassis of the vehicle.

Several parts of the car would benefit from such a noble innovation. Some of these include the anti-roll bar, double wishbone suspension assemblies, the gear stick (for manual transmission cars), and the shock absorbers. Owing to the ability to diffuse unnecessary vibrations and noise from the engine and other parts of the car, the shock absorber must contain suspension bushes. 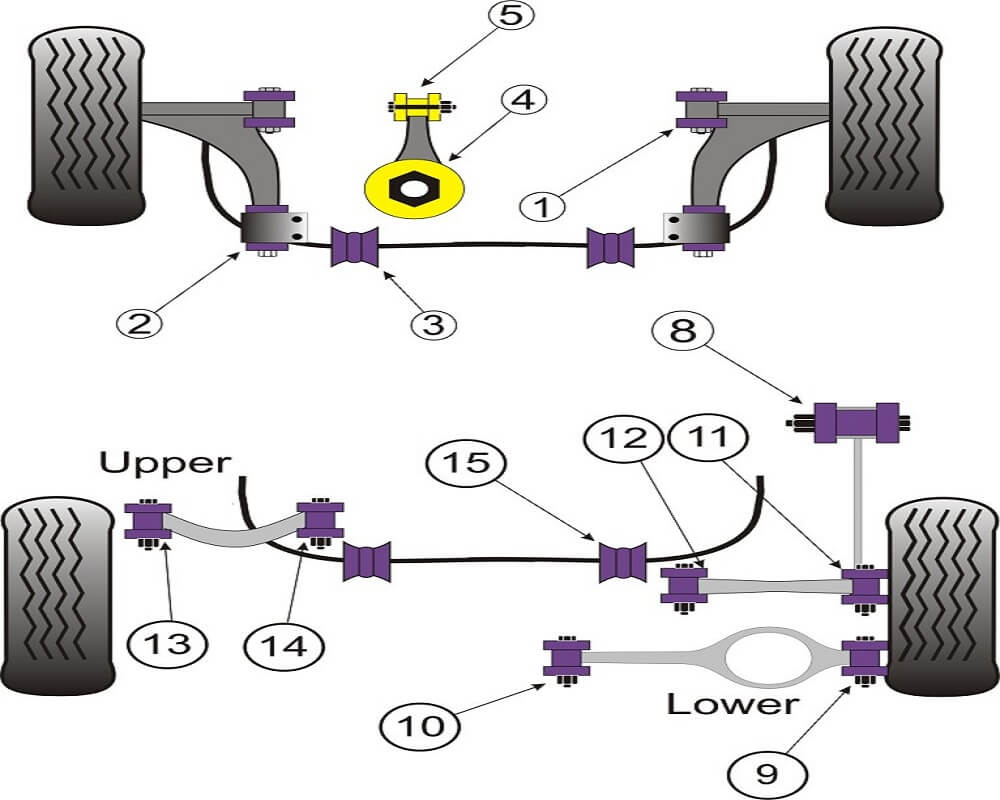 Some of the areas where suspension bushes are used.
Image Source: www.powerflexdirect.com

As aforementioned, these crucial parts of the car serve very special purposes. Key among these includes the reduction of noise and vibration inside the car. The materials used for such joints also make the use of lubrication unnecessary and unwanted. Materials such as rubber and polyurethane are friendly between the chassis and the extension parts thus not requiring lubrication to continue functioning.

However, every time you commit your car on a journey, each of the suspension bushes is worn and torn, thus requiring replacement with time. It also follows that the better the quality of your suspension bushes, the longer they will last in service. The common problems observed with suspension bushes include fast deterioration due to heat, cold, and lubrication. Also, using rubber between car elements introduces open spaces that may affect the stability of the car, occasioning grave safety concerns. When the rubber, or any other material is worn out, play is introduced in the suspension system, thus causing problems during cornering and/ or braking of the car, thus affecting the vehicle’s handling adversely.