President Raul Castro of Cuba does not know what he has done by relaxing car import rules. The vintage classics that are so common on the roads of Havana, and the Havana cigar (pronounced c-gaar) puffing drivers will start disappearing and certainly, Cuba will lose her position in the world as the only country where everyone drives a classic. 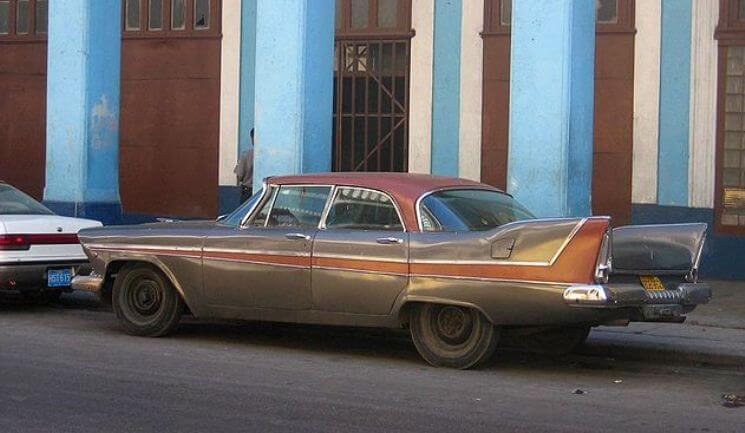 A well maintained 1958 Plymouth in the streets of Havana, Cuba
Image source: http://en.wikipedia.org/wiki/Yank_tank

Not that we do not drive classics in Africa, but you should see ours, laden with farm produce, chicken peeping out the windows, bearded goats staring out in curiosity, children who smirk with hate at their father for driving such an oldie… well, this is Africa!

Most people in Cuba drive old cars. Several reasons explain the trend but none seems convincing enough. Some say that from the trade embargo that was placed by President Kennedy, the country was forced to manage with the cars they had imported before 1962. Fortunately, over the years the Cuban people have been able to come up with necessary spare parts to keep these antique machines on the road. However, whether this is why the people here prefer old cars as compared to the contemporary models, is yet to be established.

I do not have problems with Cubans for choosing to go ‘’vintage”. After all, everybody is entitled to their own taste. Of most importance is that the cars ferry people around and contribute to the country’s economy. For now, just appreciate that Cuba is the only place where you will find American classic cars referred to as “Yank Tank” in abundance. Somehow, history and circumstance has led to preservation of these Victorian era cars and they are now a treasure to the country. It is not surprising to encounter a wooden model of 1950’s competing with new elegant models on the streets.

Of about 60,000 classic cars that are available in Cuba, approximately half of them are from the 50s, 25% from 40s and the rest date back in the 30s. The brands include; Ford, Chevrolet, Buick, Cadillac, Plymouth, Willy’s, Dodge and De Soto among others. These cars can be seen packed in rich neighborhoods as you tour the country. Some even carry the high authorities in Cuba to their respective workstations. 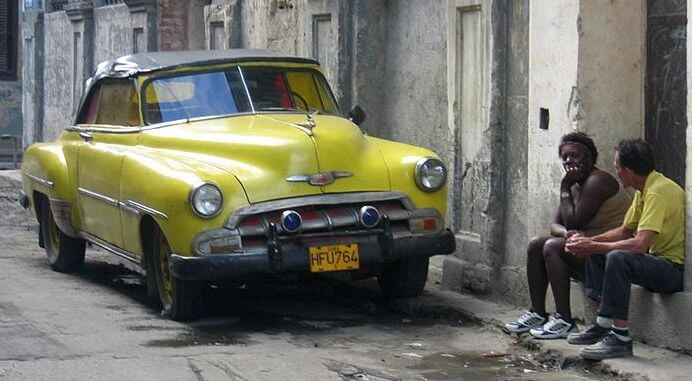 What is this man telling the classic Cuban woman beside a classic 1952 Chevrolet called maquina?
Image source: http://en.wikipedia.org/wiki/Yank_tank

The argument about the trade embargo forcing Cubans to use classic cars may sound right to many. However, there are personal reasons why Cubans will not let go of their antique cars. One is that they know too well the value of their classic cars. They have observed and listened keenly to Americans who visit Cuba most of whom wish they could have a ride in one of the models.

A lot of care and attention is given to these vintage cars. They are not only meant for public transportation but they are also adored priceless heirlooms. In some families, they have been handed down to generations. No wonder they spend their time applying polishes and waxes to maintain their lustrous looks. There are not just utilitarian but to own one of these classic models defines your personality and class too.

Cubans will go to any length to ensure that their cars are at their best. 1950s tailpipes and bumpers are regenerated and other parts adapted. Steering wheels are crafted from wood, plastic sheets pass for windows and cabs are created from aluminum cans.

How long these cars will be preserved is still not clear. There is scarcity of spare parts and lack of information on how to maintain them, as their original manufacturers would have wanted. However, we hope that they can stand the test of time. If you ever visit Cuba, hire one of these vintage cars to explore the country. 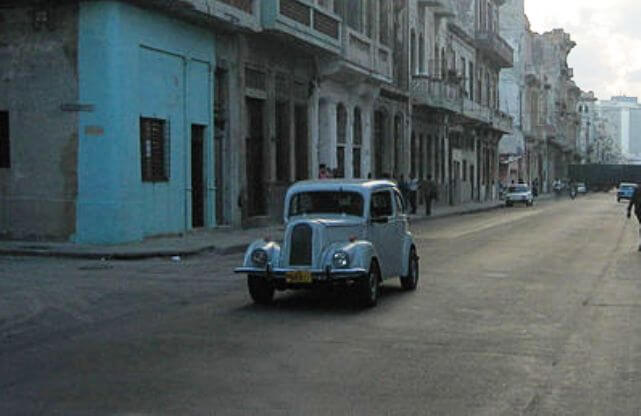 A British Ford Anglia rambling along the streets of Havana in… 2011
Image source: http://en.wikipedia.org/wiki/Yank_tank