Macho mostly means male…. But then how do you determine the gender of a car? Obviously, it is difficult. Hollywood star and retired wrestler Dwayne Johnson, “the Rock”, drives a big truck that oozes machismo from every pore. In my imagination, I would imagine that macho would be a car that would require me to press and depress the clutch, shift gears in traffic like a pro, park with squealing noises and generally attract a lot of attention. 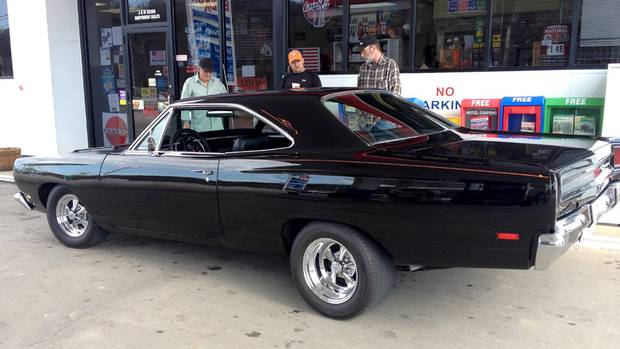 The Plymouth Roadrunner was a macho car of repute in the 60s
Image source: www.theglobeandmail.com

Masculine cars, and most of the muscle car era products of America including Chevy Chavelle, Chargers, Ford Mustangs and others exuded opulence and power. They looked like tough bullies that could dislodge any car from their lane on the road anytime, and oh yes, they could really put in some speed when called to do so. But the macho car will just not go away. Today, like the modern metrosexual man, it has simply undergone some polishing. It is as good as ever. Whenever you see a Lamborghini Gallardo, chances are high that the driver is a man.

Here are some dude cars

This is not the first time that there is a debate about dude vs chick cars. It has been raging for a long time. Sincerely, some cars are made with men in mind. For example, the Aston Martin V8 Vantage is not only a performer when it hits the tarmac, but the sound of this car, the revving of the engine alone makes the driver feel great!

Was there a downside to this car? Yes, if you could call it that…. only men would enjoy driving this car, because of the laborious gearshifts, firm steering and the strenuous clutch and brake operation.

Dodge Vipers were mostly spotted with men. 95% of these cars were owned by men. By extension, they are mostly driven by men even to today. This can be traced to the fact that few women engage in racetracks that involve sports vehicles like the dodge viper models. Dodge Viper models have been designed with masculine cues. Since most men desire to show aggression, power and show off with flashy vehicles, this car has such features. For instance, its big wheels have been pushed to the outer corner of the vehicle to protrude as the face of the wheels. This shows power and ability.

This is no doubt one mean beast of a male car, with its double set of rear wheels (optional). In most of the articles posted online about this truck, it is labeled as extra tough and muscular. Even if one does not mind the embellishments given about its features, just seeing it alone eliminates all doubts as to its gender.

Even some names signify the end of the macho car

It starts with the names, a very worrying trend indeed. For example, Galant, Evoque, Cabriolet, Prius, Vitz, Duet and so forth. These names do really have some femininity to them. Compared to names like Mustang, the car that would evoke the image of a big stallion in mind…. you know what we mean.