There is a long history behind inspired motors. Actually, most of the autos we have today are products of inspiration. For example, the name “Lamborghini” was inspired by the fighting bulls of Spain. “Mercedes” was the name of a woman and so forth. However, today when we talk about inspired vehicles, one visualizes something very different. This art has been taken to a new level as was demonstrated by DC Entertainment and Kia Motors America when they unveiled an inspiring project to raise awareness and aid for hunger victims in the Horn of Africa. 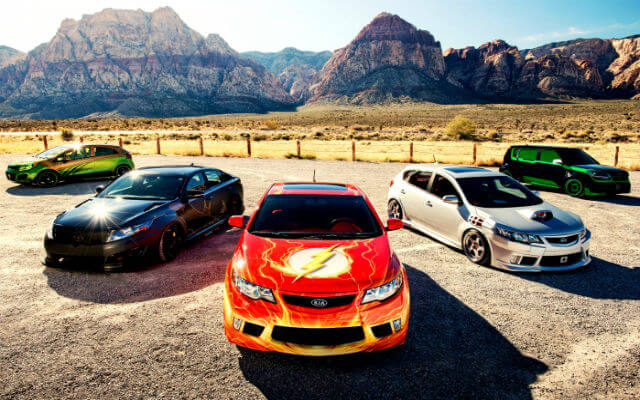 Since the 1960s, the Justice League of America has been behind the creation of great comics and superhero characters like the batman, the green lantern, Martian Hunter, Flash, Aquaman and many others, KIA motors agreed that JLA were indeed the right team to partner with as they are well known and beloved of all people in America.

The campaign kicked off super hero style, to say the least! It was like a dream come true, only that this was not a dream but reality as the five KIA monsters inspired by the Justice League Superhero Team were unveiled mid October 2012. When Kia motors partnered with DC comics, everyone knew that something big was in the making but nothing this big. It was a shocker, as you will see in the pictures. Let us look at the inspired motors , one by one and see what makes them a must-see for ardent fans.

Kia Soul for the Green Lantern

Lovers of the Green Lantern series will love this car. It is made after a pilot who is given a ring that gives him supreme, out of this world power and together with other powerful individuals, he must guard the universe against impending evil. Hal Jordan is a well-known name in the Green Lantern world. 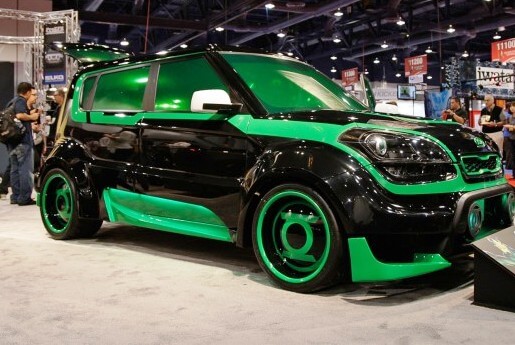 Coming in green, even the headlights of this car have been blackened to give it a green glow. No matter how you look at it, this car is indeed a green lantern. The rims also glow green.

Kia Forte Coupe for The Flash
Flash has always been associated with speed and that is what Kia America gives speed maniacs in this inspired car. The Flash logo is hard to miss even when you are flying on the road at supersonic speed. However, mind the speed limits. This car is a Forte Coupe built by West Coast. The red, orange and yellow flashes of color are quite an inspiration. It reminds one of lightning. Everything about this car, even in the interior, has been customized.

5-door Kia Forte for the Cyborg
Rides Magazine has built the Kia five-door forte and it has souped-up most of its parts to come up with a great road machine that will make all who see it go wow with wonder. This car has been built to perfection, right from the anodized bolts, 18 inches TMB wheels (Rotiform), metal custom fenders to the Aztec silver painting. Leather (perforated) and suede (red) have been used extensively in the interior and the LED red lighting reminds one of the glowing power core of the Cyborg.

Kia SLX Limited Batman Optima
Custom wheels 18 inches, heavy performance brakes, and then the matt piano black paint for the body completes the super Batman look. The yellow LED accenting throughout the vehicle gives an appeal across board, and thus the old and young alike love it.

The front grill of the car is shaped like a batwing and the high performance exhaust trims the back job perfectly. The batman logo is clearly visible from the wheel caps and other areas in the car. It is after all Batman inspired. 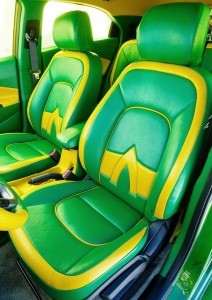 This is the perfect car for eco-friendliness as Aquaman, the protector of the environment inspires it, from the wheels to the performance exhaust system.

Built by west coast, this car has received superb customization. Everything from the green suede seats that bear the Aquaman logo to the Oracle LED lighting spells environmental friendliness. A Rosen Entertainment monitor and a powerful 12-inch sub woofer add to the interior décor of this machine, and the We can Be Heroes video.

What can we say? If this is Kia motor’s Plan for the Horn of Africa, hunger will have no place in Kenya, Somalia and Ethiopia. Thanks to Justice League of America, DC Entertainment and Kia motors, people now have a recognizable cause to give to. The funds will be donated to the IRC, Save The Children and Mercy Corps.