The last decade or so has seen massive infrastructural development across all of Africa. The economies of many African states have now taken shape, particularly with the advent of democracy and accountable governance. These economies had unsuccessfully relied on agriculture as the main economic backbone for a long time. The need for change presented a myriad of choices for the leaders and economic planners all of which were beneficial, thus complicating decision making.

For instance, there was need to upgrade the service industry, attract both local and international investors, increase trade with neighboring states and so forth. All these are viable and productive steps to undertake. But there was one key strategy that was somehow elusive in the minds of many; infrastructural development. Economies needed to address the issues of water, electricity, education, health and transport. This takes us to our next point; improvement of the transport sector in Africa.

Transportation is key in economic development!

Realizing the need to improve the transport sector for sustainable economic growth was the game changer for the African states. This has seen to the completion of many transport projects in the continent from railways, waterways airports and most notably, road projects. Of all these, roads have had a more profound impact on economic stimulation and growth. More than 85% of movable factors of production; goods and services in the African market are transported by road.

Why road transport in Africa?

Why, one would ask, the apparent over-reliance and overemphasis on road transport in Africa? The reasons are simple and compelling. First is the issue of capital. It takes up comparatively lower capital to initialize and set up a road network than it would to establish the rail or an air terminal, even forgetting the units of carriage needed here -the aircraft. The classes of roads also make it appear worthwhile to maintain road systems rather than opt for other transportation choices. For example, many less productive areas in Africa are served by gravel roads which are easy to set up and maintain. Poverty on the part of the people is another cause why roads have taken the lead. With the low costs incurred when using the roads to transport goods and services, the majority find themselves taking the roads as the better options. 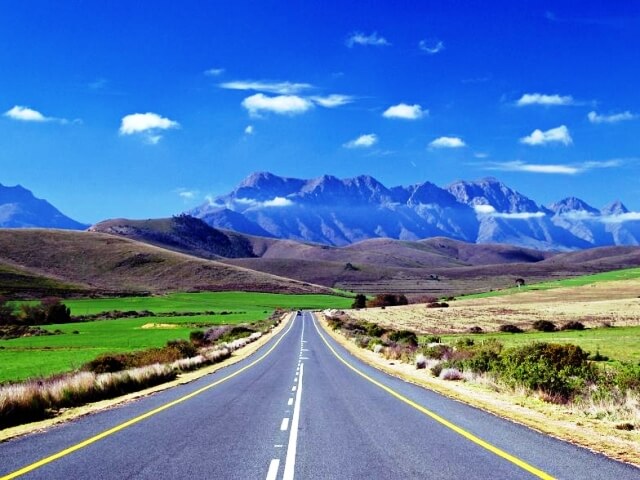 A Road in South Africa

Does it serve the purpose?

Yes it does. Today, tourism in Africa is thriving, movement of labor has become far cheaper than it was a decade ago, movement of raw materials has moved notches higher, and products get to the market in time, thanks to the upgraded road systems.

With these benefits already realized and many more in the offing, time to go trendy has come and this is demonstrated by the current upgrading of roads to superhighways to accommodate more traffic. These superhighways are already operational in countries as Kenya and South Africa as we speak.

Clearly, roads are the keys to development in Africa.