Sir, we cannot get into your mind, we cannot fathom the way you think, and for most of us even with all our Shenanigans, we will never understand why you massacre otherwise good, sleek cars to create gigantic, aggressive behemoths for the desert. But then, it is not in us to question. We are here to admire, to love, to touch (if allowed) and to cherish your creation and to assure you that, yes, we would really love to have them cars, and then we would sell them to the highest bidder … you see, it is all about money and these vehicles carry quite a tidy sum. But then, an African Proverb says… “The heart eats biscuits” Hilarious, right? Well, this translated roughly means that the heart begets what it desires. 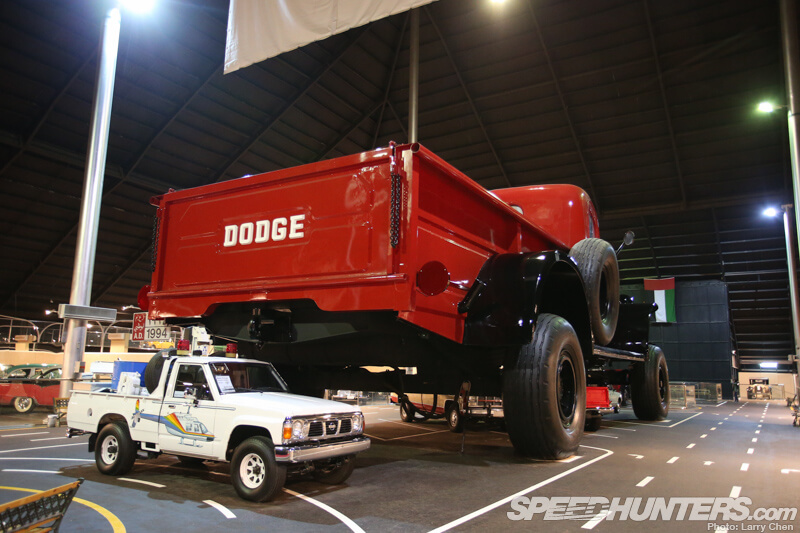 No, it is not an army truck. It is the only-one-of-its-kind rebuilt Dodge Power Wagon
Image source: http://www.speedhunters.com

But I did not go to all that trouble to write about African proverbs… no way. However, one thing that intrigues me is all that oil money in the hands of the Sheikhs and how they spend it. I do begrudge them a bit… you see. Oh my…what wouldn’t I do with all that money? But I respect a man who loves a good car and you Sheikh Hamad do know how to impress.

People… you want to know what money can do to a car? Visit the Emirates National Auto Museum owned by Sheikh Hamad Bin Hamdan Al Nahyan, whose love for cars borders on fanaticism. It is pyramid-shaped and has many monuments that are dedicated to his most beloved of cars.

I warn you, you had better have the heart for this, for this man can really massacre cars and remake them into behemoths with giant wheels, amazing traction (I guess that is needed for the desert) and well…. See the picture below: 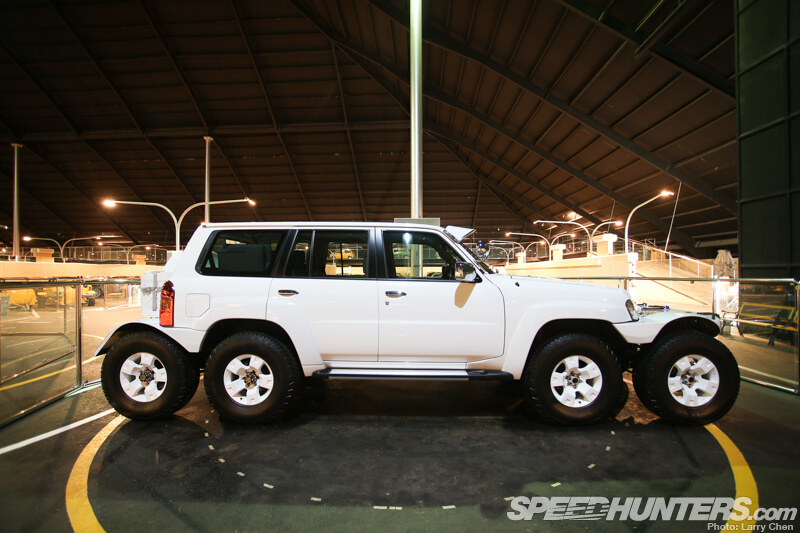 You will be tempted to touch the 8 wheeled Nissan Patrol, white in color and looking very clean. They say this one handles the desert sands very well. Compared to the 50 ton Dodge Power Wagon, this vehicle is as a salmon fish compared to a whale…yes, that is how small it is.

This (below) is a Dodge Power wagon, one of its kind in the entire world. It is big yes, and to understand that, you need to see a Nissan Datsun pickup right under it and left some room to spare… under the front axle of course. Where else? This is a behemoth, fully restored and very clean. Any sentimental reason behind the vehicle? You bet! Sheikh Hamad says the Power Wagon is a tribute to his favorite pick-up truck. The Dodge kick-started the Dubai oil economy in the 50s.

You are right. Your eyes do not deceive you Image source: http://www.speedhunters.com

A 1993 Rolls Royce Phantom ferried Queen Elizabeth around the last time she visited Dubai. It sits there in its glaring beauty, just as the royalty that it is. Then there is the New York City Taxi, fresh, with even the sticker on the door. Woe unto you if you love time travel movies… as the cars here will take you many years back.

Oh, lest we forget the tribute to the black feet…well, you know who I mean, no offense intended, but here sits a wonderful looking California Highway Patrol car (I hear they were referred to as CHiPs) back then. I would say this car reminds me of… “caution! Big brother is watching”, not that I have anything against Uncle Sam, except when NSA reads the emails that I send my girlfriend.

There, Sheikh Hamad, I know we have not even touched the tip of the iceberg… but honestly, you have done a great job. Is it true that most of these cars found their way to you as gifts? Well, wealth begets wealth…. This from a poor African.

Under the belly of the Dodge Power Wagon
Image source: http://www.speedhunters.com/

And to you folks that think Africa is a country…. Here is an excerpt about the UAE

The United Arab Emirates is a collection of seven small emirates bordering the Arabian Peninsula and the Persian Gulf. It is also neighbor to Oman and Saudi Arabia. Dubai is ranked the second largest state or emirate in the UAE. Unlike the other cities in the Middle East, Dubai is extremely sophisticated. Despite the hefty construction going on everywhere, this is home to the worlds only “seven star hotel” and tourists flock there every year. Should you happen to go there, check out the Emirates National Auto Museum? If the Dodge Power Wagon does not impress you, nothing ever will.

And finally… if you read this far…thanks for reading my third rate (or is it tenth rate?) post. Thanks to Speed Hunters you too can now have an eyeful of the best. Me… huh.. never been to Dubai, but thanks to Google, I feel as if I have been there and back. Maybe one day…. Inshallah