One thing that you have to love about Nigerians is their class and style. This is depicted in the way they dress, talk, socialize and do business. However, modernization in Africa has molded a unique class of Nigerians, the celebrities who have taken right after their western counterparts in the way that they dress, eat, live and drive. It is on what they drive that we are going to focus our attention on and bring you a few celebrities from across the divides like sports, music and business. Read on Autograph time in London – John Obi Mikel in none of his rides
Image source: http://photothisandthat.co.uk/tag/nicholas-razzell/

He has every right to be Nigeria’s topmost celebrity, apart from the President. He is more of an international personality because football is international. He plays for Chelsea and with a salary of 5.8 million US dollars as of 2012, you would expect this midfielder to drive a good car.

No, he is not a weaver. He is the best entertainment export from Nigeria. One thing that all Nigerians have in common is that they love a good hearty laugh, you know, the kind where you end up clobbering each other’s shoulders in the name of glee. Humor pays in the big buck for Basketmouth. Bright Okpocha (his real name) is way ahead of many comedians in Africa and is today one of the most well known entertainers in the continent.

Basket’s Opel Insignia, his gift to himself for 2013, customized and the first of its kind in Africa
Image source: ibakatv.com

Identical P-Square twins, Peter and Paul Okoye are great musicians by the modern standards. They command a great following in Africa and when it comes to writing about the best entertainers in Africa, they alone would command more than a chapter. What with everyone, humming to the lines of their songs all over Africa?

They dropped a shocker when they built hundreds of millions worth of a mansion in Lagos and bought a private jet. It is little wonder then that one of them would give his girlfriend a Range Rover as a gift.

She makes millions every month from blogging! It is only fair to expect a sleek, curvaceous and smart woman like her to drive one of the topmost rides in the market. In her collection, the Infiniti FX35 reigns supreme. In addition to blogging, she is a top class model and makes some good naira from modeling gigs. She is a well established entrepreneur. Surely, you didn’t think the beautiful lass could be contained in blogosphere alone, did you? 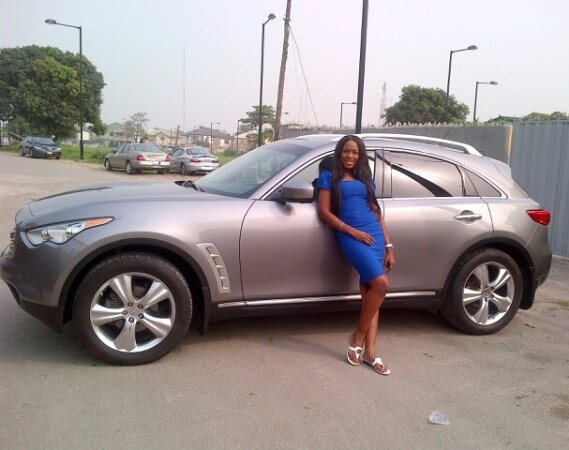 Every lady’s dream, the richest man in Africa, yes, big as it is, and he says that he is just getting started! One thing is for sure, and it is that we would worship the ground he walks on. Therefore, even if he drove around in a beaten ’79 beetle like President Mujica, people would still admire that car. Dangote has made his fortune from manufacturing mostly. This man is after making Africa a manufacturing powerhouse and from the deal signing that he is doing with almost every country in Africa, he has made it. Thankfully, he has created direct and indirect employment for millions of people in Africa. Bless him!