Roughly translated, “Matatu” means three. It was coined way back in the colonial times, because back then, the fare to most places used to be three cents. Thus, the terms mapeni matatu (mapeni is swahili for cents) evolved to matatu. Today, this name has stuck. It is viewed with disdain and respect in equal measure. That aside, the public service vehicle industry in Kenya is obviously a big deal if the money the matatu owners spend in ‘pimping’ their vehicles is anything to go by. Flash and glamor led to the creation of the Nganya Awards event that happens every year at KICC. Here is a bit of what went down in the November 2013 event.

Splash of colors and graphics on pimped buses and minibuses
Image source: nairobizblogazine.blogspot.com

It is apparent that the public service vehicles have changed for the better in terms of passenger comfort. Some of the vehicles plying the routes in Nairobi are more than just public transporters, they are some kind of luxury transport mode. These vehicles have been fitted with features that make travelling comfortable and interesting. You can find big screens, Wi-Fi, loud clear music, and comfortable sitting arrangements.

The Public has been furious over the hooliganism and carelessness that costs lives. The event was aimed at providing an opportunity for the matatu owners to show their safety measures as well as reward the best looking vehicles in the different categories. The awards were based on votes by the commuters who use these vehicles in different routes and after the many votes, there were winners chosen. The judges had a rough time selecting the winner because all the entries were fascinating in their own unique way. At the end of the day, there had to be winners and the others; not losers. Some of the categories included the best Sacco, conductor, driver, most compliant route, best design, best CBD operator among many others.

The idea behind these Awards

When it came to the announcement of the winners, the crews and all the people present were anxiously waiting to hear which vehicles took the day.Usually there are many awards, some going to the most courteous crew while the others go to the safest bus or van. The good thing is that such awards motivate more people in this industry to be safe drivers, to treat passengers well and slowly, with initiatives like these ones, the industry that had hitherto been known for many ills will get a facelift. 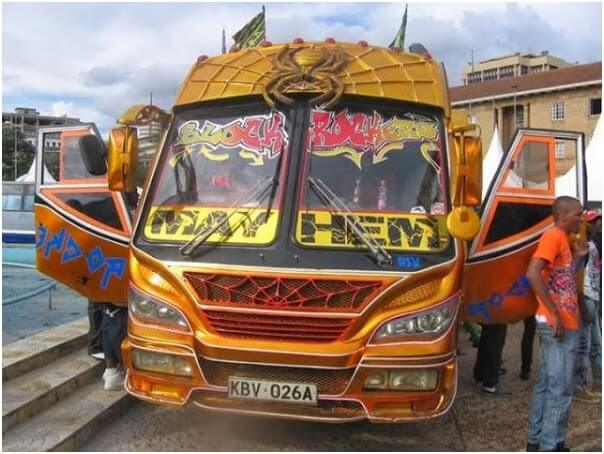 one of the Award winners in the 2013 Nganya Awards in Kenya
Image source: www.kenyan-post.com