Three wheeled auto rickshaws will soon be taking over the mass transport sector in Johannesburg! Known as the Tuk-Tuk, (wonder where they got their name?) Maybe it is from the African way of corrupting words and sounds to fit imagination. They must have got their name from the tick-tock–ing sounds of their engine. 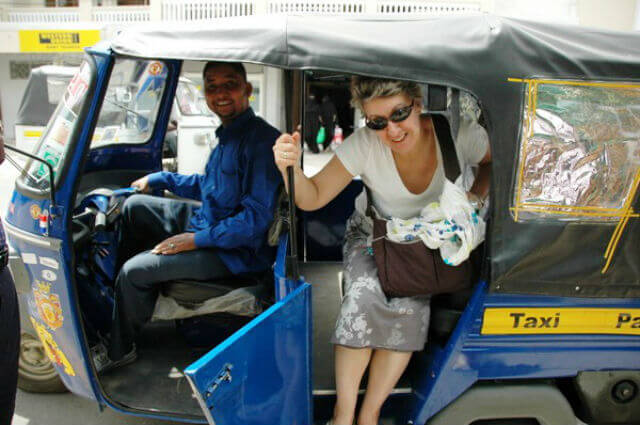 A happy passenger alighting a tuk-tuk in Nairobi Kenya

Numbers do not lie but they can be frightening! And in Jo’Burg they do just that very well. There are close to a million cars in Johannesburg alone, for a population that is yet to hit 4 million, this makes it the highest vehicle to people ratio in the world. The environmental effects this has makes the tree huggers stagger with shock and the economic impact has economists reeling numbers in their head like slot machines.

There is the American Dream, and then there is the South African dream. The latter is indeed mind-boggling, to own a vehicle before one hits 25 and you are right! The numbers of youths in the African continent are overwhelming! Already, with a ratio of 1 car to 4 people, surely we don’t need more in Johannesburg.

The three wheeled savior
“From India for Africa with love” should be the fitting title, but Africans are disdainful of small things and therefore we are yet to know how the Tuk Tuk promise will be received in Johannesburg. This is surely the next best way to ease the congestion in South African urban centers. Small, able to maneuver everywhere, pick and drop passengers almost anywhere, these tiny wee bit newcomers have more flexibility than cars. But does everyone agree with that?

“More safety, less drinking and driving, less congestion….” says Rina Jeyakumar, co owner and founder of the group that is leading the green transit solution for South Africa. Her hopes are that people will embrace this tiny car better, and leave their cars at home to travel in this. Hopefully, everyone will agree with this point of view.

Whether they embrace it or not, one thing is for sure and that is that the auto rickshaw will revolutionize business in more ways than one. First, it means less carbon emissions from Africa, not that there has been much of this anyway, but any little thing that anyone can do is very welcome. Second, it eases congestion in the public transport.

Setting the trends for Africa
The tuk tuk transport is a thriving business in Kenya, Ethiopia and Nigeria. There is no way it can fail in South Africa and once it kicks off there, it will spread all over Africa.

The rest of Africa is watching this keenly because many Africans share the South African dream, to own a car as soon as

they can keep both ends off the ground! Johannesburg is the trend-setting city of Africa and what happens there soon follows suit in other capitals in Africa. If the auto rickshaw business kicks off, it will be replicated throughout Africa.

With some Johannesburg residents receiving the small vehicles with disdain, others however agree that this is just the right time for the idea. The e-Tuk Tuk foundation says that initially, the tiny three wheeled vehicles will do 5-kilometer ranges, and that is just enough for the speed of 40 kilometers per hour.

Owing to its small and versatile nature, do not be surprised to see this auto rickshaw on the foot trails too.