Most folks take rally to be a complex task best left to the professional driver. However, a chat with a rally driver will show you how much rally driving is a like if not similar to the normal way of driving. The difference comes with the fact that rally driver rely on Defensive driving i.e. Driving to reach a particular destination faster than the rest.

All rally drivers learnt to step on the gas pedal to accelerate and the brake to come to a halt. Mastery of the basics marks the advent of professional driving. Luckily, your rally legend, either Joginder Singh or Ian Duncan have a bit of driving tips to pass on to you while driving on African roads. 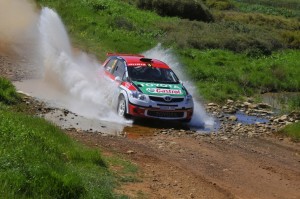 The first tip is about knowing how to make good sliding motion. Proper sliding is one of the many things that are used as a traction tool in conditions of dynamic friction. Rally cars move under dynamic friction which is actually sliding friction. On the other hand, the normal car is driven under static friction, which is gripping friction.

Basically, when driving a rally car sliding around is necessary for stability. It is not just an attempt at being macho. Using this tip you can be able to navigate well through a slippery gravel road as well as on a sticky road. For instance when driving through a gravel road that has very little static friction calls for throwing the car sideways. This way, you will use the tires in two directions simultaneously to land on a fresh surface having less friction.

The second tip is about making turns the right way. When driving the normal car, the driver identifies where he wants to apex the corner then pulls the car smoothly through that point. Rally cars on the contrary, need to follow the same path and as they do so, they should slide while the wheels point straight ahead relative to the car.

Sliding during the tackle of a corner is necessary for a number of reasons. First, at this point, the static friction is at its lowest and we will therefore use the sides of the tires to absorb some of the lateral forces of the corner.

Secondly, controlling a car on a slippery road is easier when the car is already sliding than a car that is gripping. The third reason is that you need to employ the use of power of the engine and work through the wheels to grip your way into the apex of the turn.

This maneuver is explained technically as a means to counter the fact that always when you are sliding, you are outside of the static friction circle. You need to increase traction because at that position, the coefficient of dynamic friction is constant. To do this, you have to increase the weight on the tires by using the brake and throttle.

There you go, driving tips from the rally legends themselves. Next time you hit the road, apply one or two of these and be a road champion in your own special way.

A Tech enthusiast obsessed with anything on wheels